Destroying Carrier Parts is the main objective of the game!
Here are some explanations about how they work and what happens when they get destroyed.

First of all, every Carrier Part has adurability of 10000 HP, which they recover over time when left unattacked (up to 20 per second depending on the time left unattacked), unless completely destroyed of course (HP are down to 0). Due to this regeneration, it is strongly suggested that you concert your effort with your team to attack the same parts in groups, or in relays to lessen its regenerative effect. 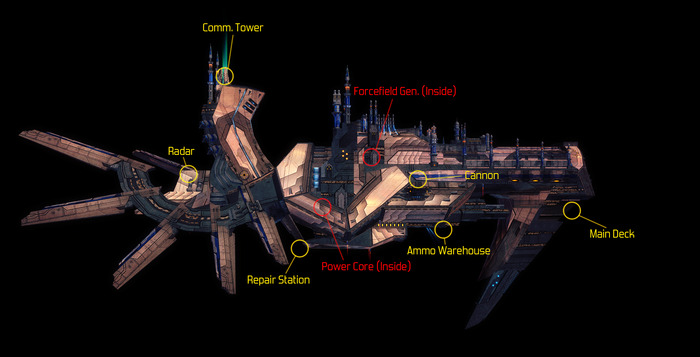 - The Hull has a durability of 16000 HP instead of 10000.
- Unlike other Carrier Parts, the Hull doesn't regenerate on its own at all!
- Any spot on the Carrier Ship which isn't considered another Carrier Part counts as "the Hull". it is much harder to defend compared to other Carrier Parts since it can be attacked from anywhere.
- Gunships which require a lock to shoot will be forced to find one of the Hull's "Weak Point" to be able to lock on it and shoot it.
- Destroying defensive turrets damage the Carrier Ship's Hull by 250 pts each time.
- Weapons with large enough Blasts used on other Carrier Parts often damages the Hull as collateral damage, making it a juicier target if destroyed later in the game.

- The Cannon is completely covered by a Forcefield, which disappear for a full minute during the Cannon's shooting sequence.
- The Cannon shoots the enemy Carrier Ship every 3 minutes, removing one of its 7 Integrity Points in the process.

Destroyed Cannon: The Cannon will shoot every 5 minutes instead of every 3 minutes.

Destroyed Main Deck: The fire rate of your carrier's turrets is halved.

Destroyed Radar: The range at which you see the HUD enemy indicators is reduced to 300 units instead of 600 units.

Destroyed Communication Tower: Our minimap and player arrow indicators will show [FF3939]delayed information[-]. Also, you no longer see alerts when your carrier parts reach 75% or 50% of their durability.

Destroyed Repair Station: Your team's docked gunships will only recharge their Shield at 70% of their normal rate.

Destroyed Ammo Depot: Docking only restores 70% of your ammo.

- This is an internal Carrier Part. You have to enter into the enemy carrier to be able to attack it.

Destroyed Forcefield Generator: All orange forcefields on your carrier ship are deactivated, including the ones blocking the access to your Core.

- The Core only has a durability of 7500 HP, but self-repairs much faster than other Carrier Parts (200 per second).
- This is an internal Carrier Part, so you have to enter into the enemy carrier to be able to attack it.
- In addition to this, you have to destroy the Forcefield Generator first to gain access to the Core before you can attack it.
- Arblos teleportation can take you inside directly.

Destroyed Core: 2 Integrity Points are lost instead of 1.

Retrieved from "https://god-factory-wingmen.fandom.com/wiki/Carrier_Ship_Parts?oldid=4317"
Community content is available under CC-BY-SA unless otherwise noted.